...only, I never converted to digital.

When digital cameras started to make an appearance during the early 00's, I was ready to embrace the new technology. By the time I left school in 2001, I was shooting through 2 rolls of film per week which was all my pocket money was capable of sustaining. It was exciting, the advantages of the DSLR that we all take for granted today were bound to be revolutionary and would certainly change photography forever. It wasn't until I finished uni in 2006 that I could afford the sort of DSLR I felt comfortable with and once I started using it, I suddenly started hating my photos. They just didn't look right and so even until now, I continue to use film.
I was slow at saving up for a DSLR, I still had film to buy and process but mostly I just wasn’t in a hurry to “upgrade” to a digital camera. I was still enjoying the ritual of loading and unloading the film and the anticipation of seeing the photos only after spending an hour in the lab. Some of the photos I’d look forward to seeing the most would be those I brought back from my urbex trips. I’ve no doubt that the act of exploring abandoned and decaying buildings has been the pursuit of the underground for a long time but in the early 00’s it was coming into its own as a genre of photography and St. Mary’s, one of the most popular urbex attractions in the UK was bang on my doorstep. 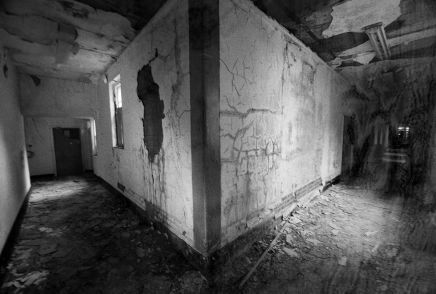 I made regular trips to St. Mary's asylum and Leigh, my oldest and closest friend, was a regular companion. Rooting through my box of photos from the asylum to accompany this post, I came across this one and I couldn't help getting a little emotional. I made lots of memories with Leigh and I feel robbed of the opportunity to create more... 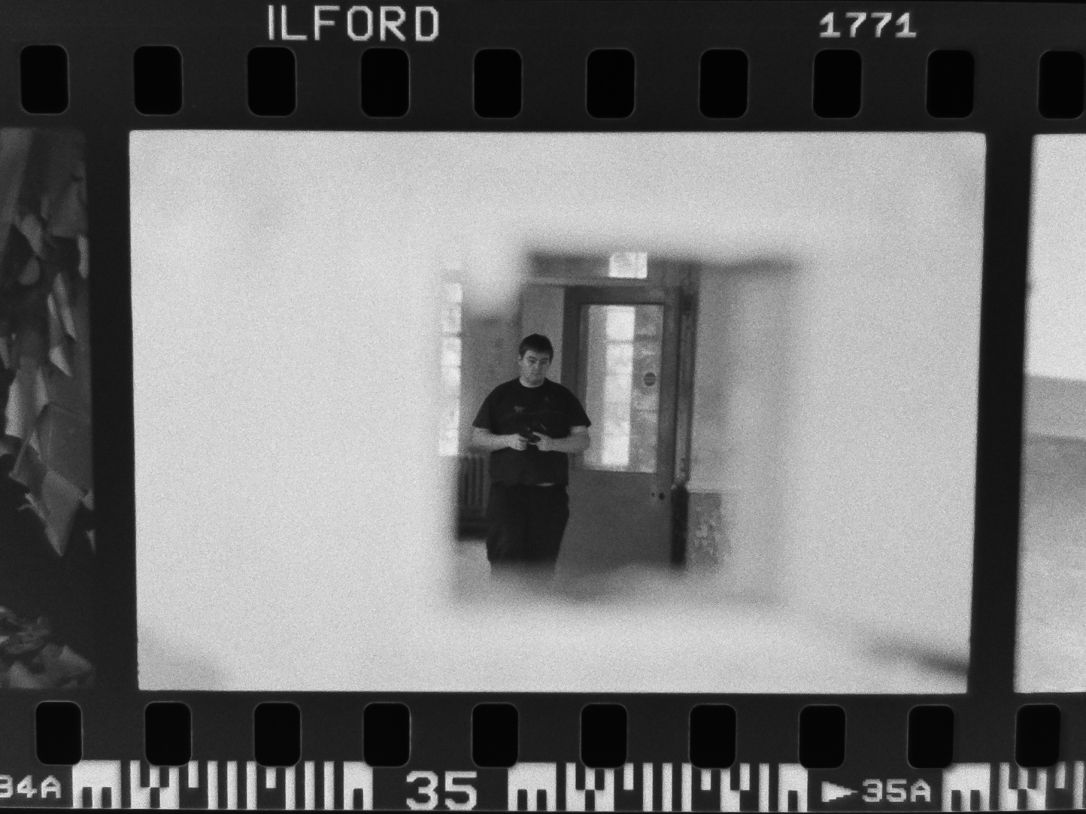 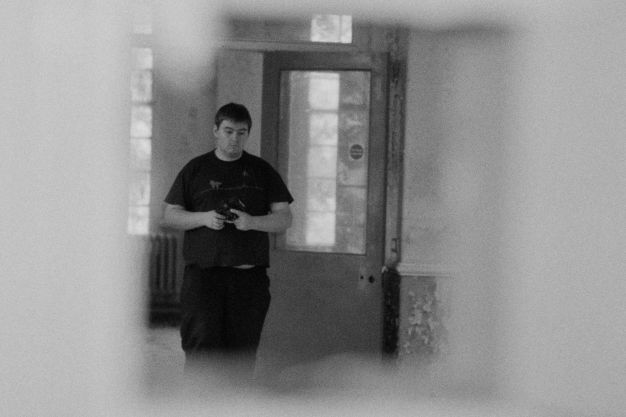 When I eventually started using a DSLR, Leigh was always the one to complain that my photos just don't look the same anymore. It's probably because of Leigh that I decided to shelf the DSLR and carry on using film. I knew my photos didn't look the same anymore and I found it annoying, but it really bugged me that Leigh stopped enjoying them. He always used to like it when I included the film sprockets in any of my prints and so for this post, I've tried to honor that. Photo on the right is slightly cropped down just for better framing, the other is a snap of the negative taken with my phone.
I have other reasons for sticking with film and for once I’m going to resist climbing onto my soap box about the DSLR and the breed of photographer it has given birth to. The biggest letdown about photos taken with a digital camera is that they lack character. A digital camera has a very accurate colour reproduction, it's perfect and that's the problem. To get it to look interesting or to lift what is naturally a very flat image, “photo-shopping” is needed. Film is imperfect and has what I call a characteristic colour reproduction, each film stock has its own inherent way of representing colours and contrasts, an interesting colour pallet and satisfying aesthetic without poking at it with the Photoshop stick. 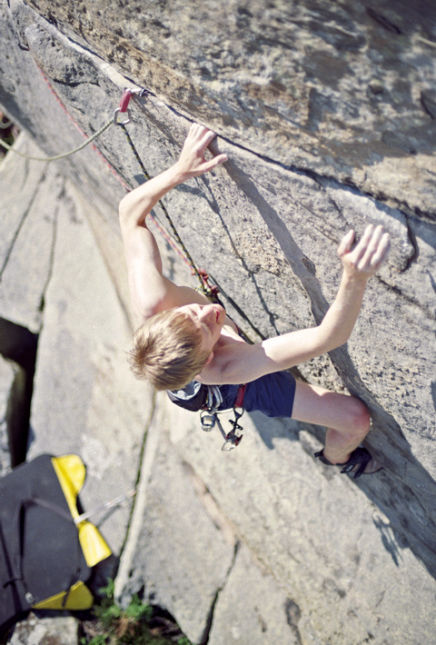 Much like climbing, using film forces me to slow down, think harder and build discipline. One of film’s apparent weaknesses against digital is actually one of its greatest strengths, because there’s a tight limit on the number of photos I get to take home, I only release the shutter once I know I’m going to create a keeper.

Climbing and photography have been two major constants in my life and they pay into each other quite well. Climbing has a way of shaping you as a person, making you more determined and focused on your goals, it teaches you that nothing is impossible, it teaches you how to stay in control, how to maintain patience and gives you a confidence that leaks out into other things you do. Climbing and photography, of course, form a perfect partnership.

Whenever anyone finds out that I’m still using film, they generally always have the same questions to ask and I’ve created an FAQ post here in attempt to answer some of them. One thing I didn’t tackle in that post (probably because it usually comes across as more of a statement than a question) is the idea that film photography is a nuance. This is probably because the introduction of the digital camera has created a surge of new photographers (got a smart phone? If you’ve used it to take even just one photo before ever using a film camera then you belong to that surge) and it’s these photographers who then discover film and then claims are made about how these photographers are reviving film.

It seems absurd to me that film photography right now is considered the nuance. Film in photography has been around for the past couple of hundred years and only extremely recently, the digital camera has had anything to do with it. Now, there’s “photography” and “film photography” which seems to me, completely backwards. Especially because any photo taken with a digital camera (in my opinion) is seriously lacking in character and aesthetics without it being sliced and diced in Photoshop.
Like I said, when the DSLR first appeared it seemed revolutionary and that it would disrupt photography in a huge way. Well, it’s now safe to say that it did and in my opinion, the DSLR has ruined still photography.
Blog Index

Made with Mobirise - Go now